Adapter classes in Java with example

In this guide, you will learn about various adapter classes in Java, their implementation and usefulness in developing GUI projects with an easy and understandable example.

Now that we understand adapter classes in Java, let's take an example and start coding to understand its implementation.

Here, the MouseMotionListener is a java interface that is altered whenever the mouse is moved or dragged about. We are also using setSize(), setLayout(), setVisible() methods. setSize() is a method in the Java vector class that is used to set the size of a vector. The layout is set as null in this program, it means that fixed locations and sizes don’t change with the environment. Do note that, setLayout(null) is very useful for making quick prototypes.

The mouseDragged method is summoned when a cursor is being dragged in a window listening for mouse motion event of type MouseEvent.

In this code, we have set the color of the graphics as blue. And lastly, the getGraphics() method gives us a graphic context for sketching or drawing in the component you designed.

Since we learned about the methods required to implement adapter classes and the functions they perform, let’s take a look at the final code!

let's check out the application of the code we developed! 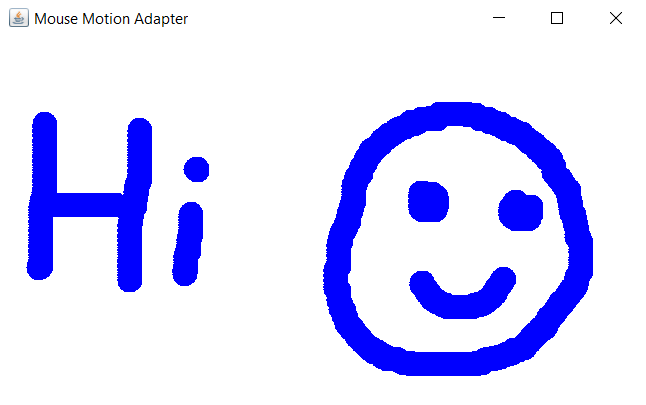