In these types of problems, a salesman or a salesperson have to visit n cities. For example, we can say that the salesman makes a tour i.e if he started from city A then he went to city B then from City B to city C then from city C to city D and al last he same back from city D to original city A from where he started so this cycle is known as Hamiltonian cycle i.e A-B-C-D-A. So in this, a salesman wants to visit from city A to city D and he has three ways for it so this problem helps us know the shortest path to travel from city A to city D. The goal of this problem is to find a tour of minimum cost. In this, we assume that each and every two cities are connected so this type of problems are called as travelling salesman problems.

We can model the cities as a complete graph of n vertices, where each vertex represents a city.

Here is the Output for the Approximation Algorithm for Traveling Salesman Problem, using nearest neighbor in Java 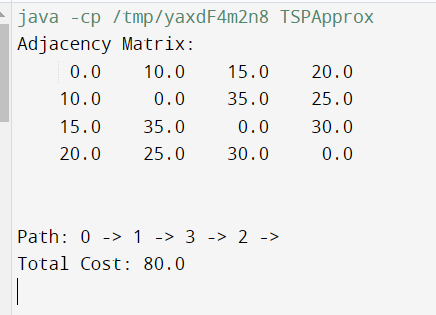