In this tutorial, we are going to learn about CHI-SQUARE FIT TEST to find correlation between variables in Python.

To determine that if two categorical variables are having a significant correlation between them we use the Chi-Square test. For example, we build a dataset and try to find a correlation between vegetarian food and non-vegetarian food with low-calorie and diabetic food. If a correlation is found then we can find out the food preferences of different people.
The general formula for this test: Square of the sum of observation frequencies-Square of the sum of expected frequencies/sum of Expected frequencies 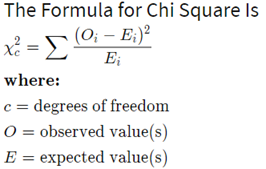 We import chi-square from scipy.stats to directly use it in the code. There are other ways also to perform this function.

Observed frequencies in each category.