A project that helps to detect any movement in front of a webcam and also plot a graph that shows how much time the object was in front of the camera, using OpenCV Python library.

1. motiondetectoropencv.py: In this, we make use of the OpenCV library to detect the motion. For detecting motion, we can only use this file.

2. graph.py: Here, we use the Bokeh library for plotting an interactive graph that contains the data about the time intervals that an object was present in front of the camera. Also, this uses the 'motiondetectoropencv.py' file, so both files should be in the same directory. If we want to plot the graph for motion intervals, this file should be used.

1. Importing Libraries: In this project, we make use of OpenCV library, Bokeh library, pandas library.

After installing the above libraries, we can just import them into our code, by writing 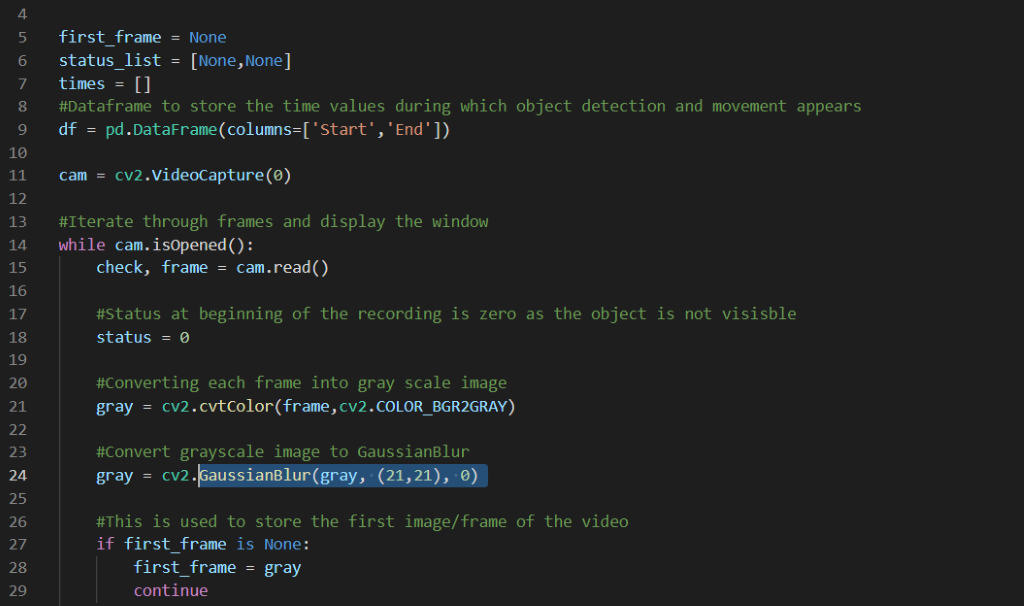 4. Motion Detection: Using 'findContours' we can store the coordinates that are different in two frames in an array, here it is 'cnts'. Now, since we do not want any small motion like moving lips, or talking, etc., to not be detected we will define another threshold, i.e., we will consider only those contours whose area exceeds 20000 or else, we will just ignore it.

6. Plotting graph: Time Intervals will be plotted using Bokeh Plot. Bokeh is an interactive visualization library that targets modern web browsers for presentation. Here, the time intervals are collected by the CSV file and then plotted using Bokeh. The red color shows that an object was under motion, time is displayed in milliseconds(ms).

This can be deployed in CCTV cameras for detecting suspicious activity and also can be used by motion-sensing devices or IoT devices.