By Srikar Vishnu Datta Venkata A

There are two types of priority queues:

1. Min - PQ: In this type, the elements enter the queue normally, but the element with least priority comes out first from the Queue.

We are going to implement priority queues with the help of heaps.

A heap is a tree with some special properties: Every node in a heap should be greater than or equal/less than or equal to their children.

4. Heapify: Heapify is the process of creating a heap data structure from a binary tree. It is used to create a Min-Heap or a Max-Heap.

b. downHeapify: This is the process in which the elements are adjusted after the removal of an element. For example, in max heap after an element is removed this process is done to make sure that the heap is still a maxHeap.

5. size: returns the size of the Queue

6. isEmpty: checks if the Queue is empty or not and returns a boolean

There are 5 classes for the implementation of Priority Queue:

Intially we create an Elements class to store the element's value and priority. The element is of T type that means it can be any type but the priority is an integer.

Also we have created our own class to throw our own exception named as Priority_Q_Exception. This class extends Exception class.

2. The code for max heap and min heap is almost same. It differs only in the part where the elements are arranged according to the property of heap.

3. All the elements are stored in an array and operations are performed on the array in such a way that, min/max heap is always maintained ie., elements are rearranged after every insertion and removal.

4. When we perform heapfiy operations (both upHeapify and downHeapify), the elements are arranged in ascending order (in case of min -PQ) and in descending (in case of max-PQ)

To execute the program, run the PQ_MAIN class. 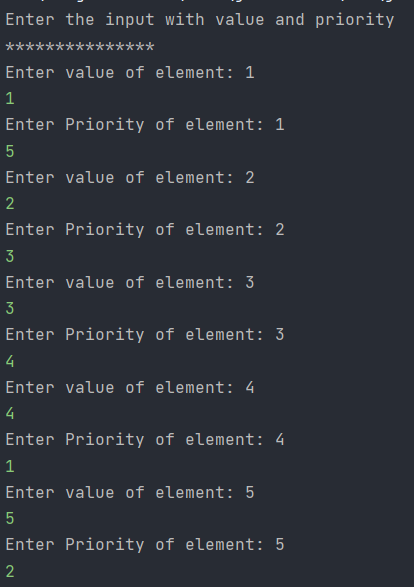 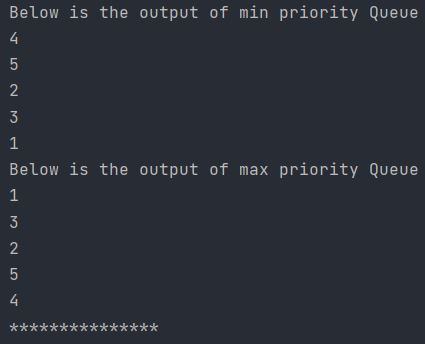