A Machine can be trained to make a sequence of decisions to achieve a definite goal. In artificial intelligence, this is usually done by a giving a reward or penalty for every action taken by the machine. This method is called reinforcement learning and it belongs to the category of unsupervised learning.

The main advantage of SARSA is that, the reward/penalty of an action can be updated after each state, and need not wait till the end of the episode.

This involves taking an action at the starting state, move to next state and update the value of the previous state.

α is the learning rate, γ is the discount factor and r is the reward

The aim is to move the current state value towards the sum of reward value and γ times the value of new state ( r + γ * V(S2) ) and this done at the rate of α.

This aims to achieve an optimal Q value and not just the optimal value of the state.

α, which is the learning rate needs to be initialized, which determines how quickly we make changes to the Q function.

This procedure is used for all the episodes taking one episode at a time.

The agent controls the movement of a character in a grid world. Some tiles of the grid are walkable, and others lead to the agent falling into the water. Additionally, the movement direction of the agent is uncertain and only partially depends on the chosen direction. The agent is rewarded for finding a walkable path to a goal tile.

Importing all the needed libraries.

The FrozenLake-v0 environment is set and loaded into a variable. The necessary variables  are initialized. The number of episodes is 100 and the maximum number of steps per episode is 10

The machine is trained using SARSA algorithm by iterating through all the episodes.

The performance of the algorithm is calculated by dividing the final reward by the total number of episodes.

The updated Q-table and the performance is printed 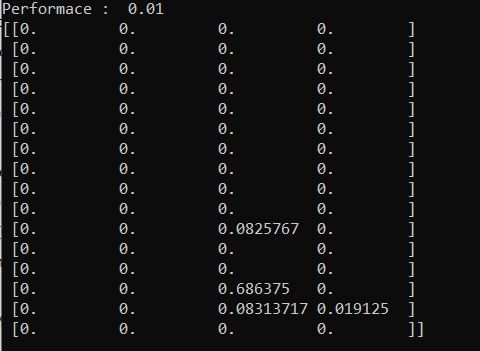 Reinforcement learning is a very important concept that has great potential and plays a critical role in the technological industry. This can be used  to arrive at solutions for complex problems with proper training and testing. Thus, SARSA Algorithm can be used to serve this purpose effeciently and successfully