Object detection is the task of detection different objects in an image and drawing bounding boxes around them.

Some of the methedologie used for object detection are:

(1) Sliding Window - In this a rectangular box of certain dimension slides over the entire image and at each position of the model attepmts to classify what it sees within the boundaries of the box.

(2) Reducing Image size - In this method the size of image can be reduced by certain amount and then rectangular box can be used to detect location of certain object in that reduced size image. Later this box can be upsampled to more accurate bounding box on full size image.

(3) Selective Search - The object makes proposal of which areas might contain the object of interest.

In this project Faster-RCNN architecture has been used for object detection. 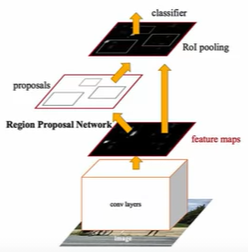 We use an exsisting and already trained Faster-RCNN model from tensorflow-hub which is a repository of models.

The draw boxes and draw_bb_on_image functions are used to draw bounding box around the detected image and run_detector function runs the detector on the selected image.