A Dice Simulator created in Python using its famous packages Tkinter and random. It inputs the number of dices to be rolled by and outputs the results of all the dices being rolled randomly. 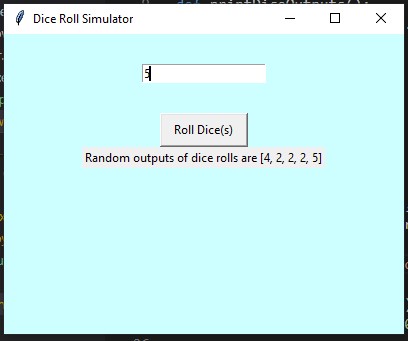 The packages used in this program is Random which is used to get a random integer between 1 and 6.

The Tkinter package is used to give the simulator a GUI.(makes it good looking)

In this, the input is taken through an Entry widget of the Tkinter package and then an empty list is initialized called 'diceoutputs' which is used to store all the outputs of all the dices being rolled. The output is then shown using a Label.

randint() function is used to get random numbers between 1 and 6. The output is then stored in a diceOutputs list.