In this project, sentiment analysis of twitter data is carried out through binary classification of tweets in Python using Stochastic Gradient Descent Classifier.

Overview and Explanation of the Project

This project was implemented in Python using NLP techniques and the Stochastic Gradient Descent model for classification.

Brief explanation about the data and the dataset used -

The dataset used was taken from Kaggle.

The data consists of three columns which are -

Necessary Dependencies for the project -

The project has been implemented in Python and the dependencies necessary for the project include Pandas, Numpy, Seaborn, Matplotlib, NLTK, Regex, and Scikit-Learn.

Workflow of the project consists of the following stages -

2. Preprocessing - This is done in order to clean the data and make it more useful.
Here, the following are carried out -
1. Removal of punctuation, hashtags, and mentions
2. Removal of stopwords, and Lemmatization
3. Removal of links and numbers.

3. Feature Extraction and transformation of data - In this project, this is done with both CountVectorizer and TF-IDF Vectorizer and the results of classification after using them are compared.

Performance of the model -

The SGD classifier is used along with both CountVectorizer and TF-IDF vectorizer.

1. Using CountVectorizer - Using this, an accuracy of 75% was achieved for this particular dataset.

2. Using TF - IDF Vectorizer - Using this, an accuracy of 72.8% was achieved for this particular dataset.

Classification reports for both the above methods were also generated in order to provide more insight into the efficiency of the model.

Important files in the project - 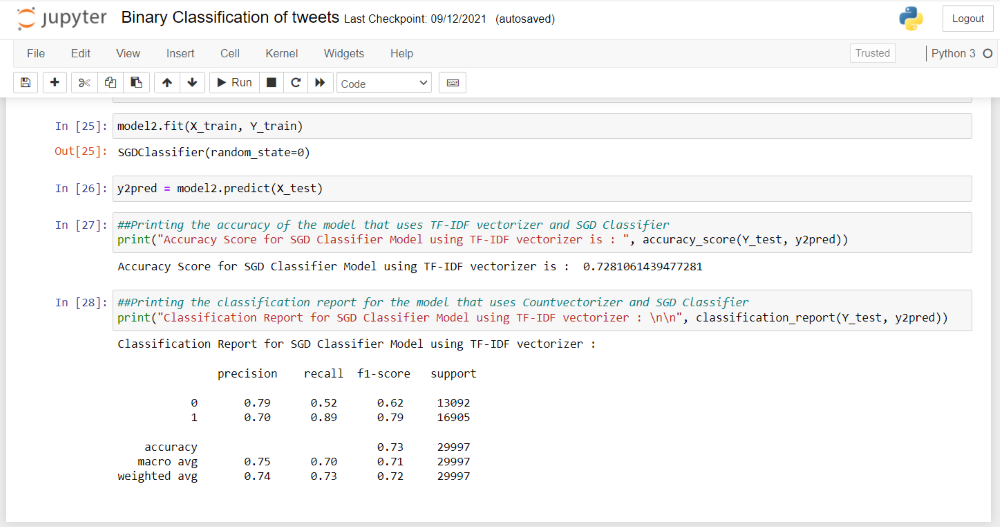