This is a simple python code to find the depth (maximum) of a given binary tree. The algorithm used is a simple recursive approach and the problem is solved in O(n) time, with a single pass.

A binary tree is a very basic and useful data structure. It is a tree-type non-linear data structure with a maximum of two children for each parent. Every node in a binary tree has a left and right reference along with the data element. The node at the top of the hierarchy of a tree is called the root node.

As we can see in the figure, the furthest node is at level 4, hence the depth of the binary tree is 4.

Algorithm to find the maximum depth:  The algorithm used here is a simple recursive approach. Here for every node, we check the depth of it's left and right subtrees. The subtree having greater depth will, in turn, contribute to the maximum depth of the binary tree. The code is -

Time Complexity - The time complexity of the algorithm is O(n) as we are traversing the entire tree only once.

Space Complexity - The space complexity of the algorithm is O(1), as we are not using any additional data structure to store any values.

Input - The input to the code should be a string containing the list of nodes of the binary tree, the nodes being in depth-first order. For example, for the given binary tree 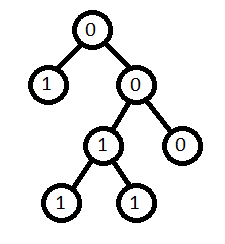 Output - The output will be a string of the format, "Max depth of given binary tree - x", where x is the maximum depth of the binary tree.

In this case, the output will be, "Max depth of given binary tree - 3".